Contact our agent near you
Prenota test prodotto
Reserved area

Case depth can now be measured quickly and accurately in less than a minute without time consuming sample preparation using continuous acquisition testing.

Case hardness matters in so many applications from automotive to aerospace to machinery tools and military to name a few. But, measurement of case depth is limited by the current testing because testers used today require a time-consuming process of cutting, mounting, and sample polishing to be able to perform sequential micro harness tests that describe the case depth of the sample. The elapsed time from start to finish is measured in hours. These limitations are eliminated by the CaseRock® HTD which offers significant innovations in case depth testing measurement. The CaseRock® HTD uses a Rockwell type approach with continuous acquisition testing to determine the hardness of the metal throughout the case and provide effective case depth results in under a minute. The CaseRock® HTD eliminates the need for cutting, mounting, polishing and sequential tests. CaseRock® HTD uses full load testing with force up to 4000kg. The benefits of continuous acquisition testing are evident in the time savings and opportunities for rapid process control feedback. 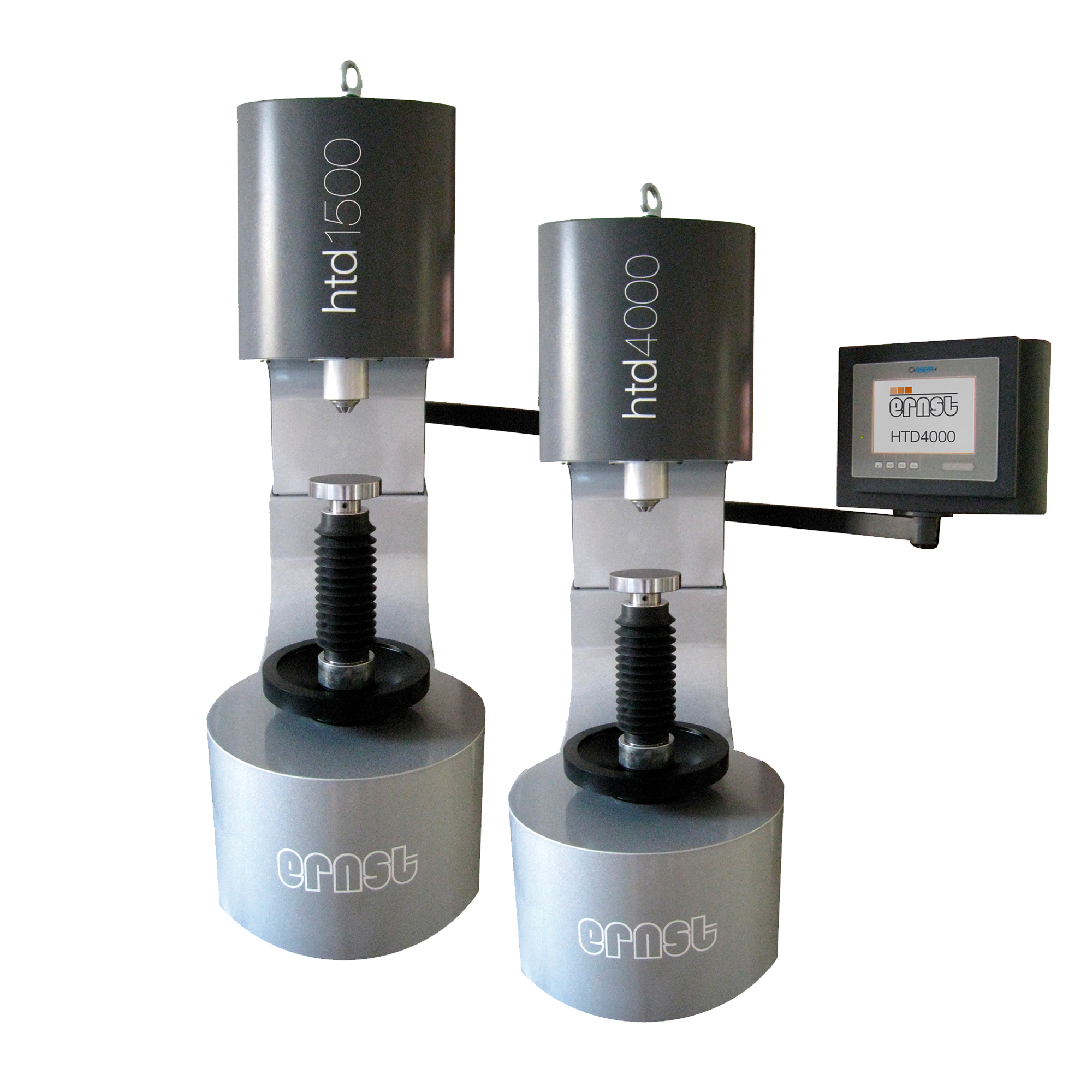 The CaseRock® HTD is designed to test the effective case depth of surface hardened layers with only one indentation and without damaging the integrity of the part. The tester uses a conical indenter having 120° and a tip radius of 0.2 mm, a penetrator shroud to reference the penetration depth and a transducer for measuring the penetrator displacement with respect to the penetrator shroud. The tester applies a constantly increasing load up to 4000kg and acquires hardness data. The data is displayed as specific hardness at multiple levels of force (see Figure #2). A proprietary patented algorithm processes the information from force and depth obtained to deliver the value of the effective case depth and the schematic curve (figure #3) of the hardened surface layer. The absolute hardness values are then converted into Vickers hardness numbers according to standard conversion tables.

The physics behind the operation

Background:
The imprint generated by HTD does not reach the depth at which you find the effective hardness sought but is much more superficial; this is possible because the impression propagates its effects well beyond its volume, all around and under the impression itself.

The measurement on thin sheets will only be valid if the sheet thickness is 10 times the penetration depth.
The distance between adjacent impressions must be at least 3 times the diameter of the impression itself.

These rules result from the observation that the formation of the measured hardness value involves a volume of material greater than the volume of the impression itself.
It is easy to understand, therefore, that, on the surface of a heat treated material, the effect of an impression produced with low loads is essentially all in the harder surface layer, while in the case of higher loads, the volume involved in the formation of the hardness value extends to areas of material deeper than the effective hardness layer sought.

Consequently, if a curve is drawn that takes into account hardness and load during the measurement, a load-hardness curve is obtained; this curve shows that, starting from a high hardness value detected at low loads and with small indentations, the curve decreases constantly as the applied load increases.

HTD provides this curve for each measurement made. The shape of the curve depends, among other things, on the depth and type of heat treatment.

Already in 1960, Bückle demonstrated the existence of a correlation between the stitching and the hardness value measured by the surface at the same point.

For this purpose, he divided the material under the impression made by the surface into parallel layers equal in thickness and depth to the depth of the impression.
He assigned each of these layers a weight, and the sum of the weights was 1.
This subdivision extends from 5 to 10 times the penetration depth.
By multiplying the different layers with the local hardness and adding the results, the hardness measured from the surface is obtained.

The CaseRock® HTD uses the information acquired from the continuous application of the load to generate a load- penetration curve (not a single value) from each single test. Figure #2 below provides an example of the test results. The vertical axis is hardness measurement and the horizontal axis is the load applied. Note the downward curve in this example illustrates that hardness declines as force (Kgf) is applied.

CaseRock® HTD testing allows for users to achieve test results and analysis much faster with savings of manpower, time and money. The process control opportunities are profound because information is available so much faster than with previous testing machines. Users can choose to tighten their process controls and increase their quality sampling. The test results reduce uncertainty and provide for improved supplier/customer communication while reducing waste and improving throughput. Cost savings are achieved through both reduction in sample preparation and testing time as well as reduction in product rejects.

With increasing emphasis in all industries on quality, tightening of standards and process control the CaseRock® HTD is a logical value added measurement and analysis tool for commercial and captive heat treaters. It provides an opportunity to demonstrate case depth consistency and decrease uncertainty while reducing the cost and time involved in case depth measurement.